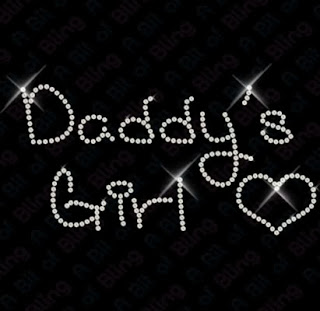 "Daddy's Girl"  The first time someone referred to me by that name I kinda got upset. I knew they were calling me a spoiled little Princess.

Well yeah! I am the daughter of a King!

When a daughter is brought into this world, the father's life changes forever. After only a few minutes in his arms, a deep, loving bond is formed. He knows he will spend the rest of his life loving her more and more every day.


The sole purpose of a father is to teach his daughter about unconditional love. It is in the eyes of her father that a daughter sees her beauty and her worth! It’s his love that will sets the template for what she expects from men.

Here are some of the things a guy should know when they are fortunate enough to have a Daddy's Girl!

1. A Daddy’s girl has learned how to be treated by a man.

If there is one thing her father taught her from the moment she was born, it’s how to be treated by other men. If you mistreat her, watch out. She will kick you to the curb so fast your head will spin.

2. A Daddy’s girl trusts her father more than she trusts you.

She’ll confide in her boyfriend when things go wrong. Her father taught her that it's okay to trust men. Never breach that trust or you’ll be gone.

3. A Daddy’s girl is use to working hard for what she wants.

When her father spoiled her she was being taught that she deserves a happy life. She has seen her father work hard his whole life and she inherited his work ethic.

4. A Daddy’s girl has high standards and will not settle.

Her high expectations are based upon years of being treated with respect by her father, who has constantly told her to never settle.

5. Accept the fact that you will always be number two to Daddy.

Her father is her role model and you will never replace him.

6. A Daddy’s girl talks about her father a lot.

When she talks about her father, she is talking about one of the most important people in her life. It is your job to just listen. Respect that, even if you disagree.

7. A Daddy’s girl won’t introduce the two of you if she doesn’t think he’ll approve.

Her father’s approval is one of the most important things to her. So if she’s apprehensive about it, give it time. She's really just trying to determine if you measure up.

Remember, her father is a man and he knows how men think. In his eyes, his daughter deserves a perfect person. And even if you come close to his expectations, you'll never come close enough.

9. A Daddy’s girl has already picked out the song for her wedding day.

There is one song on this planet that can make her cry. It is the song she danced to at her daddy-daughter dance stepping on his feet as they danced.

10. A Daddy’s girl has holds tight to her lifeline.

The thought of living without her father is unimaginable. He will always be her first love…her first HERO!
at 10:19:00 PM No comments:

An Open Letter to My Mother 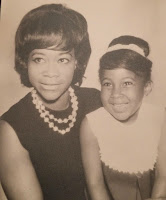 Mom, it has been 10 years since you passed on to glory, and this year it feels like yesterday.  I still reach for the phone to call you about a new restaurant, a new outfit, and your new great-granddaughters.

This world is so different now.  Of the many things I miss,  your counsel is at the top.  There is so much rage in the hearts of people. As a nurse you worked for over 30 years in mental health profession.  I remember you often said, if the government did not address mental health in America we be looking at a total breakdown of society.  Mom, we have mass killing in movie theaters, nightclubs and even elementary schools.  The first question asked, “Was it a hate crime?”

This world is so different now.  There is this thing the young women are always talking about:Haters/Hating.  I don't understand it; I didn't grow up seeing this.  I remember Aunt Martha, Mrs.Snow, Mrs. Ivey, and your friend of over 30 years, Lizzy.  I know women that encouraged you, pushed you, fought with and for you, confronted you and cared for you.  I don't understand this 'hating' thing, but I have observed it.

Women who have not seen positive relationships among women fight against or mistrust in these authentic relationships.  I want to scream, "I am not trying to stop you!  I am trying to get you to stand still long enough so I can show you how to get on my shoulders to reach up higher".

This world is so different now.  We call ourselves "Social" but we are anything but! Remember, how you said not to whisper at the table? Now we text each other about each other...right through dinner and desert! Families take separate vacations because everyone is on this thing called "A Grind". 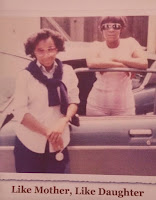 This world is so different now!  There is this thing called a "Life Coach".  Oh, let me define it for  you, it is what you would have called "Mother-wit".  We now charge people to learn those principles passed down at the dinner table.  The more you charge, the more of an expert you are considered.  Yep, common sense is not common anymore, and we have placed a price on mentoring. YOU were my first coach!

This world is so different now, yet I hold on to the words you used to pull me through.

I do listen and I hear so much.  I remember your charge to me, be the example, not just for my family but for all those God has sent me.  So I shall Live Intentional.

This world is so different now. So much has changed, but what never changes is love.

So I shall pass on what you gave me. LOVE!

Growing up in California I, like many others, are 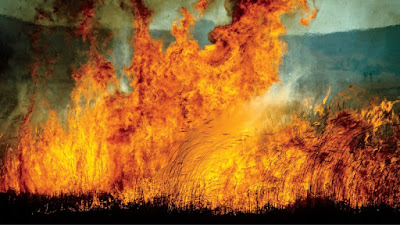 familiar with the uniqueness of the four seasons: Winter, Spring Summer and fire! (It’s a Cali thing).

These fires begin one of two ways, natural (lighting strike or heat) or man (arson or a Controlled Burn).

What is a controlled burn/fire?

A Controlled Burning (also called Prescribed Burning) is considered by foresters as an important and ‘cheap management tool to manage’ for rangelands. The fire is able to "clean" the pastures, removing ungrazed grass, a part of the litter and controlling the density of woody plants (trees & vegetation).

One forester site described why they do it this way:   WE USE PRESCRIBED BURNS TO CLEAR INVADERS AND RESTORE LAND (Why does that sound familiar)

In light of the recent news events…dare ask me which ones, too many!…

I submit, HATE is a FIRE that has NEVER been harnessed or controlled, yet so many have tried.

The list of HATE is growing, and just like ‘controlled burns’ they are now out of control.  Because of it, this land is suffering!

Let's look to the Word of God for insight on the RIGHT way we are to ‘manage’ the land.

Sow your fields, prune your vineyards, and take in your harvests for six years. 4 But the seventh year the land will take a Sabbath of complete and total rest, a Sabbath to God; you will not sow your fields or prune your vineyards. 5 Don't reap what grows of itself; don't harvest the grapes of your untended vines. The land gets a year of complete and total rest. 6 But you can eat from what the land volunteers during the Sabbath year - you and your men and women servants, your hired hands, and the foreigners who live in the country, (Leviticus 25:3–6)

We have been commanded to completely desist from cultivating (seeking, toiling, grinding) on the seventh year our fields, and whatever produce has grown is for the community. Now that’s love!!!!

Did we give it a rest?  Did we make provision for the poor, the weak, the lost …those with differing positions?  Or do we still pull from the list of "Controlled Burns"?

Intentional in Living - Will you Live for Me!

"No one has greater love than this, to lay down one's life for one's friends."

This statement was part of Jesus' final commandments to his disciples on the night He was to be taken away to be crucified.
We acknowledge His sacrifice -- His love for His disciples, and all of humanity, for which He was willing to lay down His own life.

Yet, Jesus makes clear that these words are also meant for His followers.

It is often heard by those expressing their love,  “I’d die for you!” (Happy Birthday Prince)

This has been echoed by spouses, loved ones, friends and parents alike…

“I love you, and I would die for you”

It is the Christian’s clarion call!  We proclaim it! We sing it! We put a dance on it!  I am willing to die for my Jesus!

Observation: Whether one is speaking to their Lord and Savior, to their spouse, loved ones, or friends, why is it easier to say: “I’d die for you,” than it is to say: “I’d live for you.”

In reality, most of us may not actually have to live up to the statement: “I’d die for you”.  But living for someone...wow, that require intentional actions. Actions that make us open and vulnerable, actions that take “time”; actions that must put others needs before yourself, and actions that hold us accountable!  It involves self-sacrifice daily, not just a one-time declaration!

What does it really mean to “lay down your life”? As we look into the book of John and read this verse of “laying down your life” it seems as if it could mean “ending your life”.  However the Greek definition does paint a different picture.  What you are actually called to do: 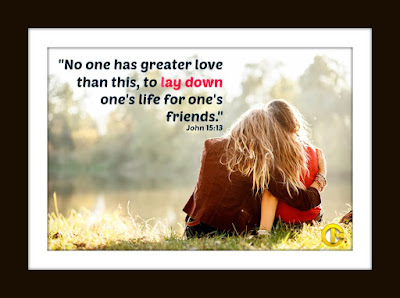 I am not saying that a willingness to die for someone is bad, I am saying it is incomplete.

What if Jesus had lived a lustful life, a self-focused life, a life void of integrity or faithfulness? Then He went to Jerusalem willingly giving His life. Would it have been the same?

Do you know what makes His death so powerful? His LIFE!

So, are you willing to Live for me?